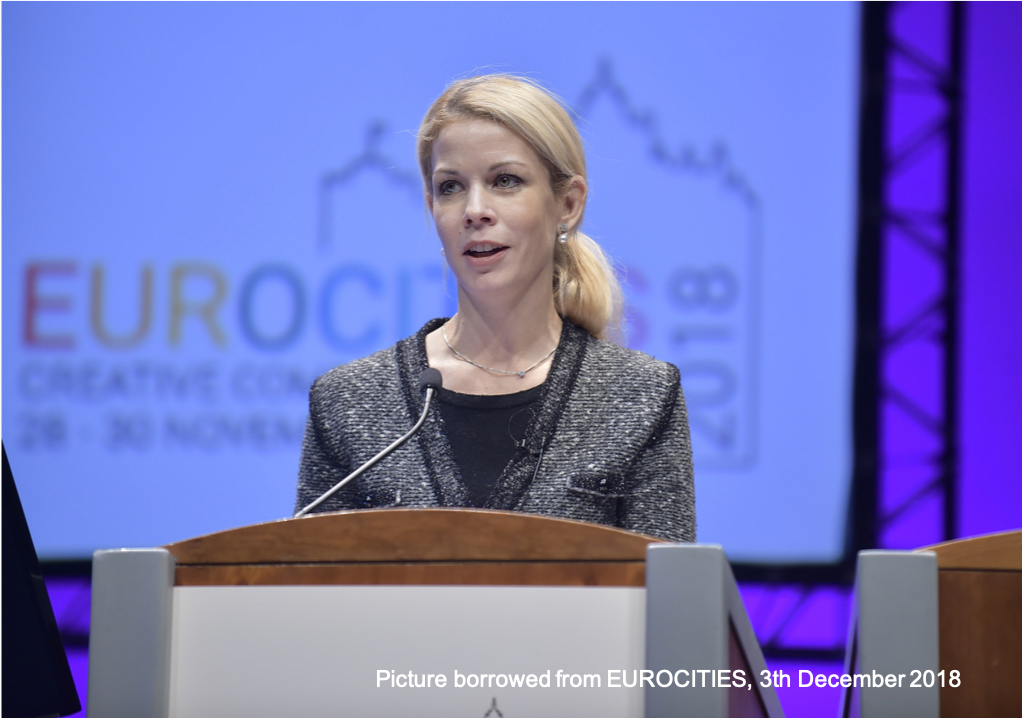 Anna König Jerlmyr, Mayor of Stockholm, has been elected President of EUROCITIES. Jonathan Andrews spoke to her on the sidelines of the network’s annual conference in Edinburgh

As the new president of EUROCITIES, what will be your main priorities over the next two years?

There is a growing polarisation across the EU, and it seems quite likely that Eurosceptic parties will see substantial growth in the coming European Parliament elections. Against this background, I believe it is very important to lift the voice of cities in the political discussions at EU level, to make a case for European cooperation, but also to underline the fundamental importance of actively working with cities.

It does concern me that the EU is still not using the full potential of its cities. After all, we are the level of government that is closest to citizens. Being in this position means that we can provide national and EU leaders with much-needed insights on challenges and opportunities on the ground, and we can help them develop more effective legislation that delivers real results. That is also what is needed to help the EU regain the trust of its citizens, in my opinion.

One key issue that I would like to particularly mention in this context is climate change. Cities are already frontrunners in this fight, but I believe we can do even more. And we also have to–given that only a few EU member states are on track to reach the targets of the Paris Agreement. That is something that I just cannot accept, neither as a mayor nor as a citizen.

Like any organisation, EUROCITIES needs the right structures and tools to be successful. At the moment we are undergoing a very interesting transformation that should provide better services to our member cities, and make our entire organisation more effective. As president, overseeing this work will of course be another one of my main priorities.

With Brexit looming, how important is the relationship with UK cities?

Both as Mayor of Stockholm and President of EUROCITIES, I believe it is utterly important that we maintain close ties to UK cities. UK cities have always been among the most active members of our network. There is so much that we can learn from each other, not least in the context of research and innovation, and nothing can change that fact. Not even Brexit.

But even apart from the obvious economic benefits of continued close cooperation, we also have to remind ourselves of the inherent values of collaborating, and bringing people together. That is another reason why I will always promote close ties with our friends and partners in the UK and all over Europe.

What role can city associations play in unifying city interests to combat rising populism in Europe?

The EU has undergone a difficult period and many people are rightfully worried about issues like stagnating wages or a lack of affordable housing. But putting up borders and increasing trade barriers will not solve any of the issues facing the EU and its member states today. In a globalised world, European companies depend on an open European market to grow and to remain competitive. And we need healthy companies for a healthy European labour market, as well as to safeguard our national welfare systems.

Challenges like climate change, rising inequality or threats to our security are challenges that are bigger than all of us. And they require cooperation, at all levels. EUROCITIES, as a network, is a true symbol for European cooperation, and as a mayor, I know how important the EU has been for our development. So at a time like today, it is extremely important that the voice of our cities is heard in the political debates at EU level. To stand up for a Europe built on tolerance and collaboration, but also to reinforce the important role of cities for the future of Europe and of our citizens.

How can you push national governments and the EU to devolve powers? With cities calling for more funds and control, can EUROCITIES assist and take this up with the Commission?

I believe you have to look no further than to Stockholm to find compelling evidence. In Sweden, we have a long tradition of political and financial autonomy at the local level. This allows a city like Stockholm to generate its own taxes and to assume responsibilities for a wide range of policy areas, from the local labour market to education, elderly services, optic fibre infrastructure or water supply. And as I am sure you know, Stockholm consistently ranks among the most innovative, sustainable and liveable cities in the world. So as Stockholm’s mayor, I would of course be more than happy to take up this question with the Commission.