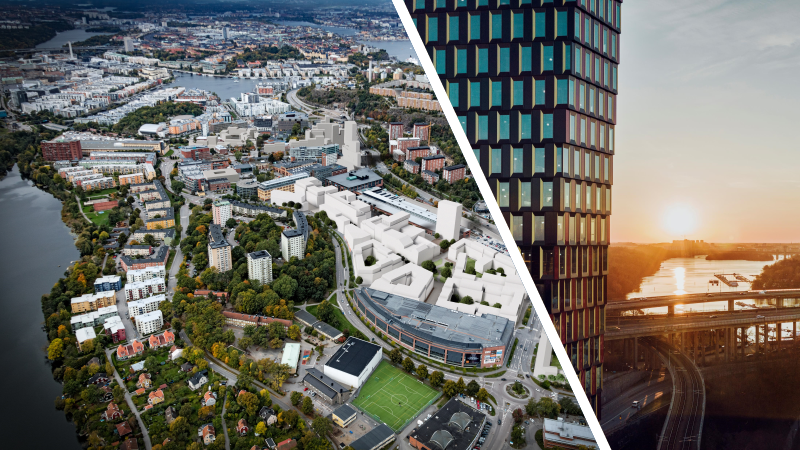 Speakers included the founder Stockholm Green Innovation District (SGID) initiative Mr Allan Larsson, a former member of the EU Mission Board on Smart and Climate Neutral Cities and Ms Helena Bjarnegård and National architect at the National Board of Housing, Building and Planning, which is the national contact point for the New European Bauhaus Initiative in Sweden. Other speakers were representatives from the SGID; such as Mr Sebastian Marx, Public Affairs & Communications Manager at Green City Ferries, Mr Peter Stigson, Director of Research and Business Development, Systems Transition and Service Innovation at RISE (Research Institutes of Sweden) and Mr Will Sibia, founder of Urbs systems.

Ms Helena Bjarnegård and National architect at the National Board of Housing, Building and Planning initiated the first panel. Ms Bjarnegård reflected upon the NEB concept, which is the soul of the European Green Deal and how it includes culture and the human perspective in the strive for a fossil free community. Futhermore,  Ms Bjarnegård pointed out that Sweden has a long tradition of working towards the target of net zero emissions. Ms Bjarnegård explained the role and responsibility a national contact point, which is ultimately about making the values beautiful, sustainable, together a reality. She stressed the importance of taking an holistic view and consider social sustainability together with environmental and financial sustainability. Ms Bjarnegård also expressed the importance of bringing together different actors, engineers and artists to increase the cooperation around the NEB concept.

Mr Allan Larsson, the founder of SGID presented the initiative and how it contributes to the NEB concept and the city of Stockholm’s climate neutral mission. The city of Stockholm was recently elected together with six other Swedish cities as one of EU’s 100 climate neutral cities and SGID is an official part of the mission. Mr Larsson raised awareness of the new governance model that is used in the initiative, the so called “Hammarby Sjöstad-model”. Another important aspect of this model is the citizen engagement. In addition, many of the partners of SGID are offering test beds for making the district sustainable, such as the reconstruction of the old meat packing district and the new garbage disposal system that is contributing to the electric car fleet and charging stations.

During the first panel challenges in innovating and transforming already existing infrastructure at a city district level were discussed, as well as challenges of bringing the solutions from a local to a global level. Ms Bjarnegård reflected upon how to include the voices of the future generation and citizens and pay importance to their perspective. Ms Bjarnegård also pointed out the value of well-designed and sustainable places for people and the planet. Mr Larsson concluded that making cities is a slow process on about 1 percepnt per year and that there is a need to focus on the other 99 percent.

“Cities are responsible for a majority of the emissions but making cities sustainable is a slow process, about 1 percent per year. We must focus on the other 99 percent.” – Allan Larsson. 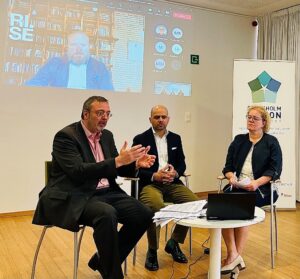 Mr Sebastian Marx, Public Affairs & Communications Manager at Green City Ferries, initiated the second panel and stressed the importance of water roads as a mean to combat bad air quality. Mr Marx gave the example of Green City Ferries, the world’s first high speed CO2 emission free ferry. It is currently under construction and is expected to be launched in Stockholm during 2024. Mr Marx expressed the potential of using already existing water roads, to avoid constructing new roads and high maintenance costs. Mr Marx also pointed out that travelling on water has a positive effect on people, from a psychologically perspective.

Mr Peter Stigson, Director of Research and Business Development, Systems Transition and Service Innovation at RISE, stressed the importance of systems planning of cities as a mean to drive innovation in cities. Another important ascpect is the access to test beds and the need for partnerships. Mr Stigson underlined that in order to have innovative system solutions, there is a need for broad collaboration and co-creating hubs. An example of this is the area Sickla, which is under development to become climate neutral by 2030.

Mr Will Sibia, founder of Urbs systems shared the insights of bringing the model of “Hammarby Sjöstad 2.0” to New York City. Mr Sibia explained how Urbs system works with developers within the real estate business, exporting the model as a package solution abroad. In particular, it is the sustainable energy resources and solutions that is of interest when the option of gas does not exist.

During the panel main challenges of scale up and implementing the solutions while creating a sustainable city district were discussed. Mr Sibia expressed the need for local level and embracing new ideas. Mr Stigson pointed out that research already has shown that it is problematic to transform lessons and ideas, since one solution might not be applicable to different countries. Mr Marx stressed the importance of financial and legislative support for exporting the solutions to the market and to facilitate implementing them. For example, the RePowerEU plan was given as an example for financial support.

If you wish to learn more about SGID visit their website here.

If you wish to learn more about the NEB concept, visit their website here.